There are more than 110,000 described species of flies in the world. But thankfully we only have to contend with a minority.

There are more than 110,000 described species of flies in the world. But thankfully we only have to contend with a minority.

HOW TO IDENTIFY IF YOU HAVE A PROBLEM WITH FLIES? House flies are one of the most common insects on the planet. They breed and feed in filth, including garbage, feces, and rotting or spoiled food. Poor sanitation and unsealed cracks in windows and doors can lead to house fly infestations.

They can taste with their feet

They can spread a range of diseases

Flies are able to see behind them

The lifespan of a fly isn’t that long. 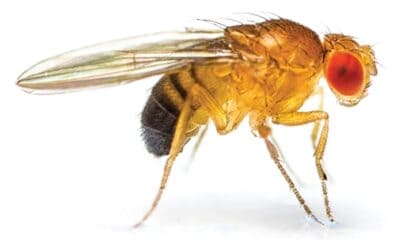 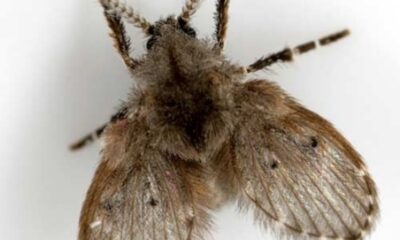 Appearance
Adult filter flies are tiny, around 2mm in width. They appear to be fuzzy, dark or greyish insects with the body and wings densely covered with hairs. The wings, which appear too large for the body, are held roof-like over the body when at rest giving a moth-like appearance.

Filter fly larvae are actually beneficial because they break down organic waste into water soluble compounds. Adult flies, however, are a nuisance. They cannot bite, but they may become so numerous indoors that they congregate at windows and around light fixtures, showers, bathtubs, sinks and floor drains.
The key to solving a filter fly problem is to find and eliminate the source—that is, the areas where excess moisture and organic debris have built up. If there are lots of adult flies inside a drain the drain is probably a breeding site. 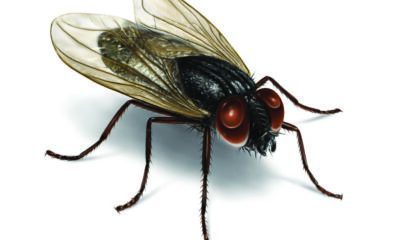 Since they live in such close proximity to people, house flies are generally unwelcome. While usually just a nuisance, these pests can carry a variety of diseases harmful to both humans and pets. House flies pick up bacteria, fungi, and viruses and then spread these pathogens by contaminating food and water.

Several health problems can develop from house fly infestations. These include food poisoning, dysentery, and tuberculosis. Regular cleaning will limit areas where house flies are able to breed. 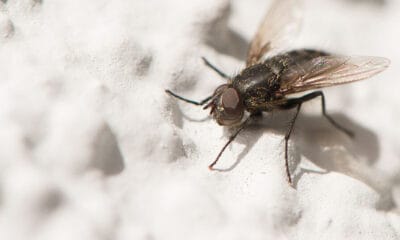 As its name implies, the lesser house fly, also called the little house fly, is noticeably smaller than the standard housefly (Musca domestica). It is approximately 5 to 6 mm in length and yellowish in coloration. The lesser house fly’s thorax hosts three black stripes.

Females are attracted to decaying fecal matter as egg-laying sites and can be a particular nuisance in chicken houses and other livestock grounds. Their eggs are white and thin, measuring 2 mm in length. Maggots develop fully within five to seven days and enter the pupal stage. , During the larval stage, they feed ravenously on the material on which the eggs were laid. Lesser house flies require a period of nine to 14 days.

Lesser houseflies move slightly faster than other species and fly in jerky, darting patterns. Lesser house fly eggs are capable of floating and can be found resting on standing water. Like common houseflies, lesser houseflies are known carriers of pathogens resulting in human ailments, including typhoid, cholera, dysentery and anthrax. They pick up pathogens from fecal matter and other decaying material, and then transfer it to humans by landing on exposed food and other surfaces. 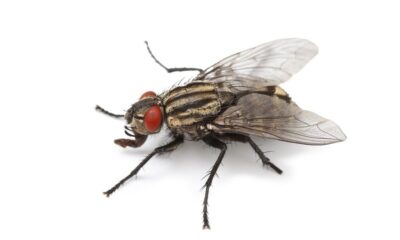 Cluster flies are 8mm long and are a dark grey colour, with small patches of gold hair on their back and long wings. Appearing in spring, cluster flies will begin to lay eggs outside and will hibernate in your home around nearing winter, around August time. To get rid of cluster flies you can use your vacuum cleaner, aerosol fly killer or call your local professionals who will be able to use smoke bombs or foggers for more effective results.

Methods for getting rid of cluster flies

Make sure your home is tidy and clean, cluster flies love food and drink spills, stagnant water, open rubbish bins and pet excrement. If you’re aware of having a cluster fly issue, install fly screens over your windows, to prevent them from making their way inside.

Blowflies including Bluebottle and Greenbottle flies are large flies with either a black or iridescent metallic coloration. The presence of large numbers of blowfly is often indicative of the presence of a dead animal upon which they have bred, although sometimes it is the result of poor refuse management and collection.

Blow flies lay their eggs on dead animals, meat, fish refuse, and animal dung within which they feed until mature. The larvae then migrate to a dark dry place where they pupate and hatch into the adult fly. At room temperature (about 20 °C), the development from egg to adult can occur in 6-11 days.

How Did I Get Crane Flies?

In the Autumn and spring, lawns near wooded areas or open fields often have a population of crane flies. In their mature form, the adult females lay eggs in grass. Dampness and heavy rainfall increase their numbers.

How Serious Are Crane Flies?

Only in their larval state do these pests cause any real damage. After they hatch, crane fly larvae eat grass crowns and roots, leaving large brown patches on lawns. As adults, the insects are mostly a nuisance.

Mature crane flies often annoy residents when they fly into homes and bump against the walls or ceilings. Although they look like giant mosquitoes, the pests do not bite people or feed on blood. Since adult crane flies only live a few days, an entire generation may perish at the same time, creating foul-smelling piles of dead insects on sidewalks and driveways.

We are here to help, if you have a problems with Fleas, use our contact page for any enquiry.

Our technicians are trained to thehighest standards.

We are proud to be Registeredin Ireland.

We service the whole ofIreland.